Did you know Kenilworth was actually first its own town?  Learn more about the history of the Town of Kenilworth.

Kenilworth rapidly developed into an established neighborhood with expansion slowing down during the Great Depression. After World War II, additional sections were developed and infill development still continues today.

Kenilworth serves as home to several landmark properties. One of the most enduring landmarks is the South Asheville Cemetery (1840’s), the oldest public African-American cemetery in western North Carolina. The cemetery, situated beside St. John A Baptist Church, is the burial site for over 2,000 African-Americans from 1840 until 1943. The South Asheville Cemetery Association leads the ongoing process of restoring and maintaining the historic property.

Kenilworth is also the home of the Newton Academy Cemetery. The cemetery was active from 1818-1919 and is the grave site of American Revolution soldiers and Civil War soldiers from both the Union and the Confederacy.

Kenilworth’s most visually prominent landmark is the Kenilworth Inn (1918). The inn, originally a resort hotel, then intermittently a U.S. military hospital and a psychiatric hospital, has been renovated into residential apartment units. The Cedar Crest Inn, a Queen Anne architectural gem originally called the Breese House was built in 1891. Zealandia, a castle like structure was built in the same time period. Zealandia housed Asheville’s first art museum, and now serves as the Patton Hospitality Management headquarters.

Kenilworth Lake was created by Jake Chiles, the land developer who created the Kenilworth neighborhood. In 1916, shortly after the Kenilworth Inn was demolished by a fire, Chiles reconstructed the Inn as a luxurious resort. It opened in 1926, when the work began on the residential side of Kenilworth.

The Kenilworth neighborhood developed quickly, due to the location and recreational opportunities. Chiles purchased the hunt club in Happy Valley to expand to neighborhood. Most areas where planned as residential, yet a large area was set aside to be developed as a golf course or lake. Around this time Chiles visited Castle Kenilworth in England, after which the neighborhood was named. Chiles discovered the castle property contained a lake, and brought this concept to Asheville, developing Lake Kenilworth in 1925 at a cost of $108,000. Since then the lake has been enjoyed by residents, providing recreational opportunities, wildlife habitat, and scenic views. Today the lake is maintained by the Kenilworth Lake Association, which originally formed to raise funds to repair the dam, proving how invaluable the lake is to its community. When Jake Chiles died, his hearse circled the road around the lake, which hadn’t been filled in yet! 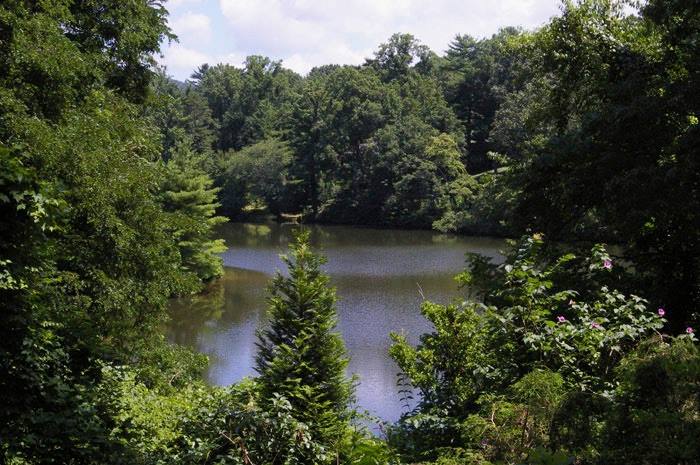 Legend has it that the Helen Bridge is haunted! 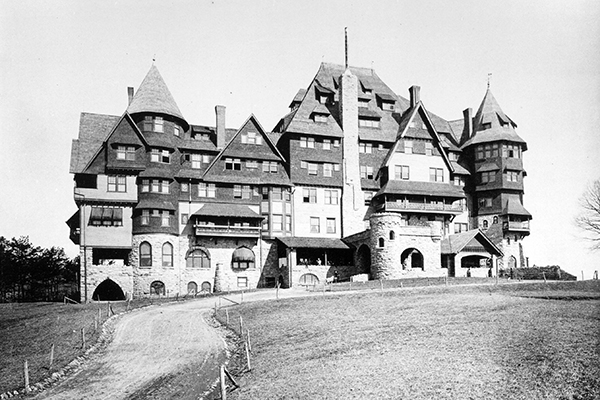 Kenilworth Inn features prominently in the history of the Chiles House. The following is an excerpt from an excellent history of the Kenilworth Inn, written by one of its residents, Mark de Castrique, who has written 2 mystery novels that use the Kenilworth Inn as one of their settings: The original structure was destroyed by fire in April 1909, ending Kenilworth’s grand first era. At the time of the Kenilworth Inn fire in 1909, James “Jake” Madison Chiles had been living in Asheville for a year. He had come to Asheville to establish himself in the furniture business and purchased the property known as the old Patton Farm, where he settled and began buying up land. Chiles may well have been early Asheville’s most avid developer and the site of the original Kenilworth Inn held an attraction for him. His aunt had filled his head with ideas about Kenilworth Castle in England, made famous by Sir Walter Scott’s novel, Kenilworth, which included a picturesque lake and a decaying castle. In 1919, Chiles decided to rebuild another inn on the original Kenilworth Inn foundation. 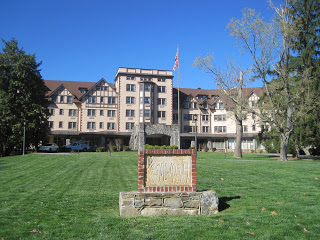 Asheville was proud of its reputation as a city where fresh mountain air could relieve various pulmonary diseases, primarily tuberculosis. Chiles, in the midst of constructing a 500 guest per day resort hotel, felt his new inn would be able to hold its own and could hardly wait for opening day.

Unfortunately, before Chiles could capitalize on his dream of a new Kenilworth Inn, the Army saw the new construction as the perfect place for a wartime convalescence hospital. James Chiles leased Kenilworth Inn to the Army in February 1918, just one month after the building’s construction was completed. He would have to wait to re-acquire the building once the military’s lease expired in September 1919. The Army made extensive renovations for the buildings use as a hospital. This work included extensive changes to the building’s electrical and plumbing systems to allow for autopsy rooms, dark rooms, various examination rooms, x-ray rooms, surgical rooms, as well as changes to some administrative offices and storage spaces.

After resuming control over Kenilworth Inn in 1923, Chiles operated the resort hotel with great success until the stock market crash of 1929. Throughout the Inn’s successful six-year run, it was the setting for social activities and events that maintained a strong tie with the communities of Asheville and surrounding Kenilworth. Luxury accommodations at Kenilworth Inn in the twenties provided sterling views of the Blue Ridge Mountains and guests were encouraged to participate in tennis, golf, horseback riding, Easter egg hunts, fireworks displays, and billiards. Kenilworth Inn brochures and pamphlets invited and encouraged the general public to visit the inn “any day or night of the week for dance, music and family fun” including picnics on the front lawn and lavish holiday celebrations. The Chiles family strongly advocated this sense of community through music concerts, radio broadcasts and other noteworthy performances, including a performance by the escape artist, Houdini.

In 1929, the onset of the Great Depression caused many banks to close and others to severely curtail business. This financial belt tightening brought the heady era of luxury resort living and notable community events at Kenilworth Inn to a halt. The assets of the Kenilworth Realty Co, including Kenilworth Inn, were sold on the Court House steps for $1200. The Chiles’ holdings were essentially wiped out.

After being sold, Kenilworth Inn sat empty for one year before reopening as a sanatorium. The old structure, with its spacious interior, drew the attention of two local doctors, William Ray Griffin, Sr., and his brother, Mark Griffin, who purchased and then converted the inn into a mental health facility in October 1931 and renamed it Appalachian Hall. In an era when many of their contemporaries were still providing treatments solely upon physical ailments, the Griffins approach to psychiatry went beyond the standard treatments of hydrotherapy, thermo therapy and electro therapy, considered a more forward way of treating depression and psychiatric disorders.

During the Second World War, the United States government again found it necessary to seek locations for battle weary and wounded soldiers to convalesce. In February 1943, Kenilworth’s Appalachian Hall was pressed into service as “U.S. Naval Convalescent Hospital, Kenilworth Park,” and the Griffin brothers’ treatment center was temporarily moved into two Asheville area hotels, the Princess Anne Hotel on Furman Street and the Forest Hill Inn in Kenilworth.

Significant changes made to Appalachian Hall by the Navy were construction of a stage in the building’s ballroom so patients could watch motion pictures and a bowling alley in the basement. The building once again became a social center for dances, picnics, motion pictures and stage shows, all hosted by the U.S. Navy. In addition, the dining hall was opened to the public to support the idea that public interaction with convalescing soldiers and sailors would boost patient morale and promote a quicker recovery. In 1946, when the Navy left, the Griffin doctors moved back in and reopened their facility.

Economics again played a roll in Kenilworth’s history when, in the 1980s, the Griffins sold Appalachian Hall to Magellan Enterprises, a real estate holdings company. The sale of Appalachian Hall can be attributed to increasing costs of maintaining such a large structure as a viable hospital, as well as increasing pressure from major insurance companies looking for shorter treatments and faster results, which naturally went against the grain of the Griffin brothers’ long standing treatment philosophy.

Charter Behavioral Health System purchased Kenilworth Inn in 1994 and the building became known as Charter Asheville. Charter Asheville operated as a 139 bed psychiatric hospital employing 175 people until it closed in 1999.
E. F. Howington, the building’s current owner, purchased Kenilworth Inn and the surrounding 25 acres from Charter in October 2000 and has been successful in his bid to place the building on the U.S. Department of Interior’s National Register of Historic Places. Located in the historic suburb of Kenilworth, the property at Kenilworth Inn continues to provide residents with views of deep green magnolias, shady oaks, evergreen trees and a panoramic view of the surrounding Blue Ridge Mountains.

For 117 years, from its first construction in 1890, to its rebirth on the original building’s foundation in 1923; from its use by both the Army and Navy as convalescent facility during both World Wars; from its various uses as a psychiatric hospital and through its current configuration as a collection of 93 unique apartments – the many names and functions applied to Kenilworth Inn have continued to preserve both property and building as one of Asheville’s lasting treasures. 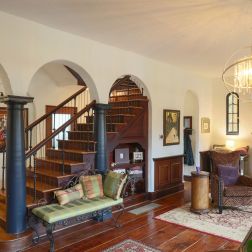 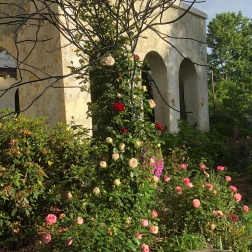 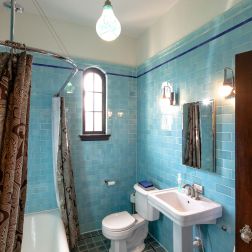 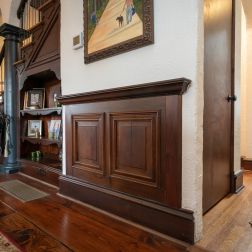 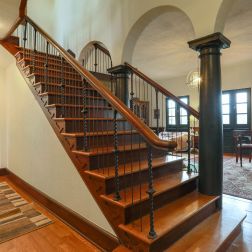 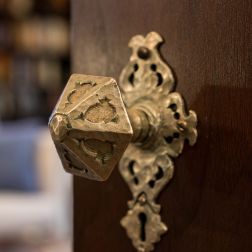 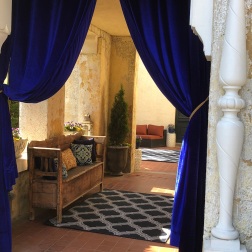 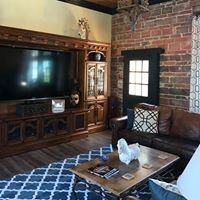 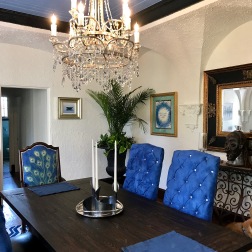 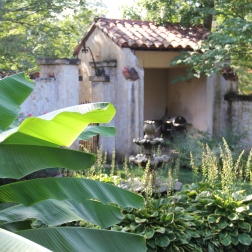 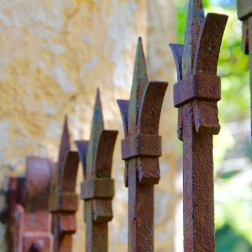 Iron gates to the walled garden 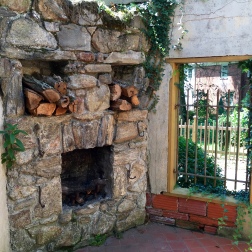 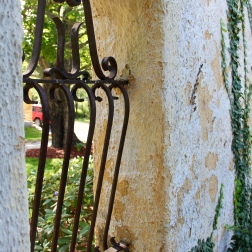 Iron detail in the walled garden 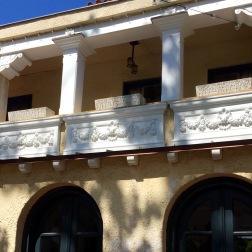 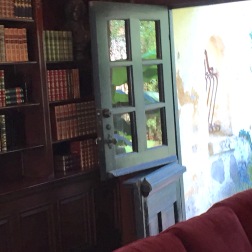 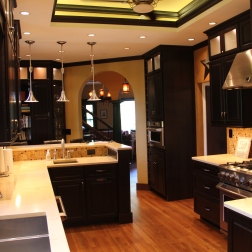 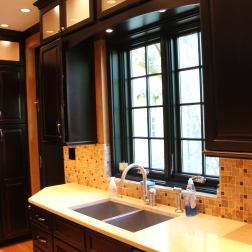 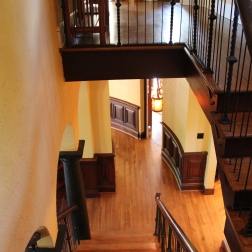 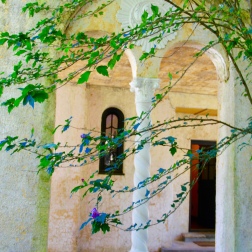 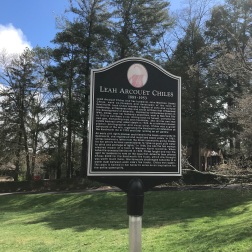 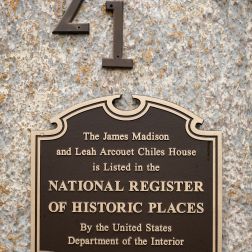